#1. Very late diagnosis of Asperger Syndrome – How seeking a diagnosis in adulthood can change your life, by Philip Wylie 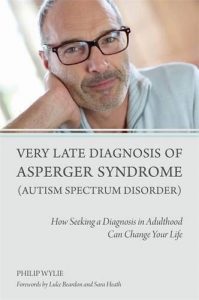 “This was the first book I read prior to getting a diagnosis and provided me with my first eureka moments! It’s written by someone who also got a diagnosis later in life, and so provides a personal perspective that really chimed with my own experiences, often moving me to tears of relief. Philip also gives a clear overview of some of the challenges that people with Aspergers/ASD face in life and at work, which has made this a helpful resource not just for me, but as an accessible introduction to ASD for my friends, family and work colleagues too.” Juzza

“Before I had my diagnosis, Juzza suggested this book was a good place to start. It was really comprehensive, even warming about how and when you go about telling family and friends, and their possible responses. A great place to start as an adult thinking about a diagnosis.” Vicky

You can buy Philip’s book on Amazon

#2. ‘Aspergers and me’ Chris Packham documentary

“This documentary about Chris Packham and his life with Aspergers means a lot to me as it opened up the first conversation about my Asperger diagnosis with my mum and dad. It’s special for me because it was mum who contacted me about it after they’d both taken the time to watch it. The bits that particularly chimed with me were his descriptions of his coping strategies – the need to live on your own in the country (tick), with your dog not another human (tick), with lots of time to be on your own to recover (tick). I also loved the description of his relationship with his partner too which I interpreted as – don’t live with them, make sure they live hundreds of miles of away, and only see them a couple of times a year. Now that kind of relationship, I think I could do! Thanks Chris!” Juzza

“I grew up watching The Really Wild Show and have always loved Chris Packham. This was a great documentary that I think will have caught the eye of older people to highlight the diversity of people on the spectrum. After watching it, the writer Kate Fox, posted this really informative blog post from an autistic woman with a late diagnosis at 42. I thought she made some brilliant points (Her name isn’t there to shout out, but thank you for your observations whoever you are!) If you’re going to watch the documentary, I’d look at this after: Good things & niggly things about – Aspergers and Me Vicky

You can watch the Chris Packham Autism and Me documentary here

“Buddhist philosophy and the language of Buddhism is something that has always struck a real chord with me and that I keep coming back to. For me, dealing with overwhelm and meltdowns are two Asperger/ASD battles that have the most damaging effect on my life and health and the people closest to me.

I personally find many Buddhist principles and strategies really helpful, both in terms of managing overwhelm and ‘building resilience’ (by this I mean holding my space and staying healthy – see my blog ‘redefining resilience’) and being critical to reducing the number and lasting impact of meltdowns. Don’t get me wrong, there’s no such thing as a silver bullet, but listening to a Dharma talk or even an emergency Buddhist phrase when I feel myself slipping can sometimes be just enough to create the gap for a less damaging course of action before the cork pops.

If you’re new to Buddhism and this kind of stuff, I’d urge you to push past the pan pipe intros and american accents which I know some of my UK compadre may struggle with, and just focus on the content – see if it helps. I’m not a religious person, and the thing I love about the Buddhists is you don’t even have to believe the Buddha even existed! These are super smart, often funny people, and many of them also have qualifications in neuroscience too.

I’ll be writing more in future blogs, but for now, here are some podcasts that I’ve found really helpful.” Juzza

*Budbergers is the copyright of Justine Gaubert

#4. Dealing with change – Recommended by Juzza

Let’s face it, in this super fast and unpredictable world, most people find dealing with constant change difficult. For Aspies, with our heightened sensitivity, change can not just be a source of major anxiety, but often completely overwhelming – hence us seeking stability through our fixed routines. Acceptance of impermanence is central to Buddhist philosophy and practices that keep reminding me of this I find really helpful in managing the overwhelm of change. Here’s a few podcasts I’ve found helpful on the theme of dealing with change.

Dealing with change, grief and loss by Tara Brach “The main theme of our lives is change.” “Go to the edge and soften.” If that link doesn’t work, try Tara’s website where you can listen to the same talk on YouTube.

Change and Impermanence podcast by Buddhist legend Jack Kornfield “When you realise that everything changes, you can find your composure within it.” “You can’t stop the waves but you can learn to surf.”

Tony Attwood, a world-renowned specialist in Autism Spectrum Disorders says that for many autistic people: “The overriding priority may be to solve a problem rather than satisfy the social or emotional needs of others.” (Attwood and Gray 1999).

This struck a real chord for me, especially at work when I instantly see the best solution and just want to crack on, without wasting time explaining it in such a way as to take in account the needs and wishes of others involved!

I love the Buddhist concept of ‘right speech’ (or sometimes called ‘wise speech’) – as for someone without a filter, it provides some really clear rules to help me communicate in a way that is still authentic, but more sensitive to the needs and feelings of others.

Anyway, I found the following podcasts helpful nudges to keep coming back to when struggling with communication issues and conflict – hope you do too.

Oren Jay Sofer: Balance & Strength in Difficult Conversations: The Simile of Saw One of my meltdown triggers is dealing with people I perceive to be ‘difficult’, rude, or unfair. And like many people (especially those with ASD), I’m also hypersensitive to criticism. In this dharma talk, Oren gives some useful prompts to ‘keep your mind balanced’ and to ‘not lash out with evil words’, even when you feel like you’re under attack.
#communication #difficult people #asd

James Baraz: Three principles for living a good life. One of the struggles many people have with ASD is difficulty seeing things from other people’s point of view (sometimes also called ‘theory of mind’).What I particularly liked about this podcast was the principle of forgiveness of those who we can’t can’t understand at all, who have their own reality that makes sense to them. I found this and the other podcast below on ‘othering’ particularly helpful after the triple whammy of Trump, Brexit and, even closer to home, Sheffield City Council taking our trees. According to James, practicing forgiveness releases you from the tight grip of contraction. As my family will testify, I’ve still got a long way to go (!!) but I can strongly recommend this as a starter for ten.
#theory of mind #preventing meltdown

James Baraz the issue of othering. I found this helpful with my ASD problem of ‘theory of mind’ – seeing things from other people’s point of view – but it’s also really useful for anyone struggling to come to terms with recent political traumas – anyone finding themselves slipping into the dangerous path of ‘othering’. Warning – the podcast starts with an extract from Trump campaigner that’s hard to listen to, but it’s great practice if you can bear it.
#othering #theoryofmind

#6. Equanimity and building resilience to deal with #overwhelm and #anger – Recommended by Juzza

When I left my job to set up my social enterprise, I received a rather beautiful present from my boss Colin – a necklace, with a silver ‘comma’ pendant. As a writer, the gift of a comma was already thoughtful. As someone quick to anger with seemingly ‘no filter’ (later to discover common ASD behaviours), my boss gently pointed out that the gift was also to remind me to ‘take a breath.’ A comma. A pause for thought. The following podcasts are loosely based on the theme of trying to build better balance, equanimity, and above all, create that gap, that comma. A pause for thought.

You are not the weather by Jonathan Foust

There’s a fabulous Yogi story in this podcast about sitting down for tea with your demons. “You’ve been here before, you’ve been here again, and in the meantime, what kind of tea would you like?” It’s a great introduction to mindfulness and ‘non-judging awareness.’

When I ‘came out’ to some old friends about the Asperger diagnosis recently, they just smiled and said: ‘oh, we always just thought you were bipolar!’ Having since read up on this, apparently, it’s common for people with ASD to be misdiagnosed as bipolar with ‘yo-yo-like mood swings.’ As such, the idea of equanimity – an ‘even-mindedness’, a wise and balanced perspective – I’ve always viewed as a highly desirable quality. But is this quality something you’re born with, or is it something you can train and develop?  My CBT therapist said that people like me with ASD are often standing closer to the edge of the cliff, and are therefore sometimes surprisingly quick to fall over the edge. This made sense to me – I find it easy to lose perspective and can be surprisingly quick to fall over. In this podcast, Oren suggests that neuroscience proves the neuro-plasticity of our brains makes it possible to ‘redirect the river’, if we are prepared to put in the work of retraining our brains.