Get a life get a label 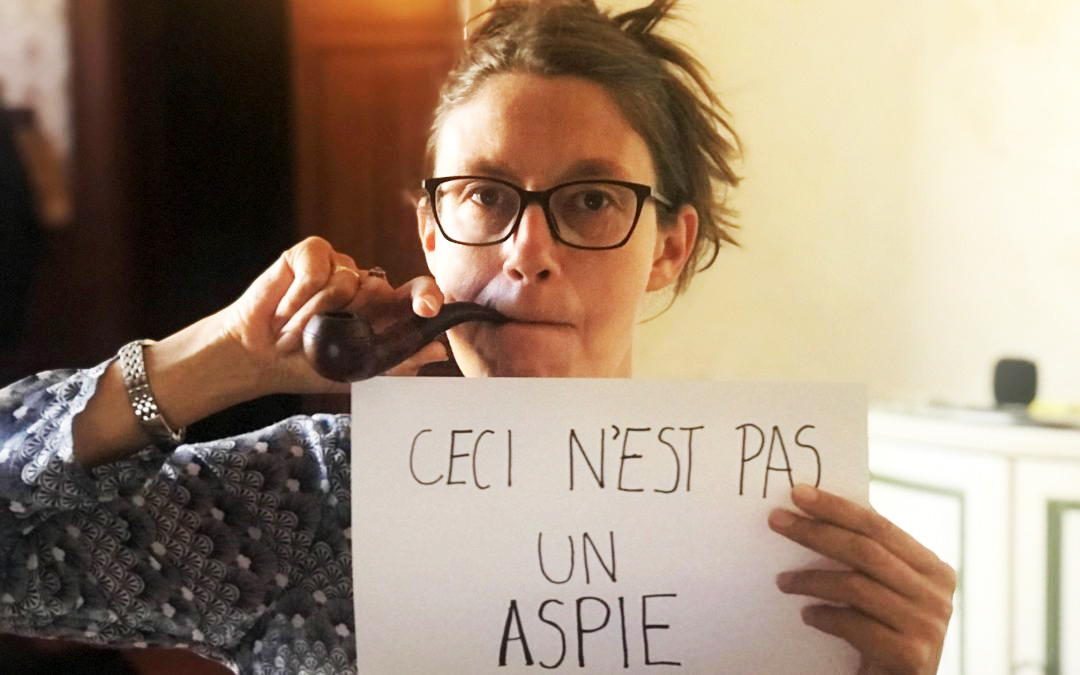 Why go for an Asperger diagnosis when you’re aged 46 (and three quarters)?

I was 40 when my addiction to collecting labels began in earnest.

Not the jam pot kind; more of the ‘maybe-there’s-actually-a-reason-why-I-find life-so-overwhelming’ kind.

Dyslexia was my entry-level drug. Relatively easy to prove. Not so easy to spell.

Then I progressed onto the harder stuff. Dyscalculia. Dyspraxia. Chronic Fatigue/M.E. Anxiety. Clinical depression. Every year discovering a new shorthand that more closely articulated the baffling brick walls I’d repeatedly face-planted into all my life.

But it wasn’t until last year – the terrifying closest I’d been to not being here anymore – that I resolved to find out, once and for all, why I was so seemingly less resilient than other people.

Why did I need to live on my own and need so much downtime?

Why was I happier being solo?

Why did I find social interaction so exhausting and need to drink so much to get through it?

Why didn’t I know when to speak in meetings and either not get a word in edgeways or talk over people?

Why was I so black and white in my thinking and why did I find it so hard to see things from other people’s point of view?

Why could I still not tell the time?

Why was I so sensitive to noise, injustice, criticism change?

Why was I so quick to lose it?

And why did it take me so long to claw my way back?

As part of my resolve, I sought out of CBT therapy to help me deal with a new work culture I was finding bafflingly challenging. Thankfully, my therapist was a caring and sensible human being, who gently suggested on a couple of occasions that many of the issues I was experiencing were similar to the issues that her clients with Aspergers/ASD also struggled with.

Intrigued, I did what any self-respecting aspie would do and went off and researched the hell out of it. My first stop was this rather wonderful book by Philip Wylie – ‘Very Late Diagnosis of Asperger Syndrome’.

There were so many things in the book that made me cry with relief. It felt like after years of turning up for an exam in German when I’d only been taught French, I felt like finally, someone had slipped me the right textbook under the door.

There are too many parts of this wonderful book to go into here, but one of the things that first struck me was this lovely description by Linda Kreger Silverman on the topic of giftedness- a quality that is often associated with people with Aspergers:

The gifted are ‘too’ everything: too intense, too driven, too honest, too idealistic, too moral, too perfectionist, too much for other people!”

After all these years, I finally felt and asked my therapist for a diagnosis referral. I also pinged over the gifted quote to my friend Vicky Morris, with the words: check this out mate – strike a chord with you too?
The rest, as they say, is history.

Why was getting a formal diagnosis so important to me?

Apparently, in the clinical world, there’s now a shift away from dishing out labels, so to that extent, seeking a diagnosis was bad timing. Indeed, my CBT therapist warned me not to pin all my hopes on a diagnosis for this reason. But by this point, getting a professional diagnosis had become really important to me. And here’s why.

#1. Self-forgiveness – I’ve always been angry with myself for not being able to do certain things, or because I’d find certain situations bafflingly difficult. This was often the cause of meltdowns which have been severely damaging on my health over the years, not to mention sometimes putting myself and others at risk.

Even though I’d ‘self-identified’ with many ASD traits, I knew that the only way I would be able to cut myself some slack for these difficulties would be if I was ‘officially anointed’ by a professional with the official label.

Imposter syndrome is well documented (especially for women) and I’d also felt an imposter in the neurotypical world all my life. I felt I needed formal recognition – official proof that I’d finally found my tribe – and that I wasn’t an imposter there too.

#2. The permission to ask for tweaks to help me function and perform better. This was the second reason an official diagnosis was so important to me. Even by the age of 45, I knew what my triggers and difficulties were, I knew that I’d struggle to ask for ‘tweaks’ to formal situations without having an official label.

Here’s an example – reading social communication cues is an area that many people with ASD struggle with, which went some way to explaining my difficulties in group meetings or workshops. Knowing when to speak, and also needing to get my thoughts out before I lose them, have always been a real challenge, sometimes resulting in me storming out in frustration of not being able to get a word in, or talking over people.

I hoped that having a diagnosis would give me the confidence to speak to a facilitator prior to a workshop – using ASD as an ‘acceptable’/short-hand explanation of my difficulties of knowing when to speak – perhaps leading to a small ‘tweak’ where I could put my hand up when I had something to say. This may sound like a tiny intervention, and one that I shouldn’t need a diagnosis to point to for a facilitator to accommodate, but when you’ve spent your whole life trying to mask your difficulties, asking for ‘tweaks’ doesn’t come naturally.

In short, I hoped that diagnosis would give me the confidence to ask for small tweaks to help me perform better and stay well.

How is a diagnosis helping so far?

So far, over one year on, I have to say that having a diagnosis IS helping (my brother maintains that even my handwriting is different?!)

It’s also made me more confident at work to articulate some of my difficulties, rather than waste valuable energy masking them.

In future we’ll be sharing some of the other things we’ve experienced since our diagnoses, and we’ll explore further the and of labels. But in the short term at least, I’d certainly be happy to stand by this:
Get a (better) life, get a label.